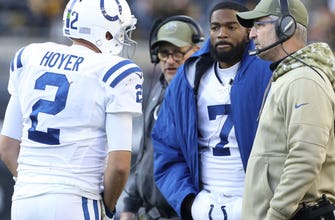 INDIANAPOLIS — Brian Hoyer bounced around the NFL for more than a decade. He’s suited up for seven franchises, made starts with five and mastered the art of excelling as a longtime backup quarterback.

The job requires picking up new offenses quickly — sometimes even without practice. Now, the 34-year-old veteran is preparing to make his 38th career start Sunday, this time for the Indianapolis Colts.

He’s putting all those lessons to work one more time.

“For me, it’s like anything — you always take one offense you know and you revert to that,” Hoyer said Wednesday, fully aware he may still be coming off the bench against the Miami Dolphins. “You say, ‘This play here, we call it a different word, but it’s the same play.’ It’s kind of like learning a language, like Italian and Spanish are pretty similar so you can sort of figure it out.”

Hoyer’s ability to interpret terminology on the fly is a big reason he’s thrived in this role for 11 NFL seasons.

Last weekend was a perfect example of what makes Hoyer so valuable.

Hoyer was pressed into service when Jacoby Brissett went down with an injured left knee. He’d taken almost no practice snaps with the Colts’ starters since signing with the team in early September and had limited knowledge of the Colts’ playbook.

Hoyer’s first pass went for an 11-yard touchdown to Jack Doyle. And though Hoyer later threw an interception that was returned 96 yards for a score, he also moved the Colts into position for the go-ahead field goal with 1:14 left at Pittsburgh, only to watch Adam Vinatieri shank the 43-yarder wide left.

The final numbers were solid: 17 of 26, 168 yards, three touchdowns and one interception with a rating of 105.9. But the overall performance was better than anyone could have anticipated given the circumstances.

“It was awesome to see him play. Some of the things that he did — like I said Sunday — I knew I wouldn’t have done, but he made a lot of great throws,” Brissett said. “He did a good job of taking command. So yeah, I thought he did pretty well.”

Brissett was limited in practice Wednesday with a sprained medial collateral ligament in his left knee, giving Hoyer his first significant practice snaps. No decision has yet been made about whether to start Brissett or Hoyer, who was released by New England at the end of the preseason.

“We’re going to rely on him (Brissett), we’re going to rely on the doctors, we’re all going to have to get together on it,” Reich said. “We don’t want to lose him for the long haul by trying to be a hero. But Jacoby is old school. This guy is as tough as they come and we’ve got to do the right thing for him and our team.”

Clearly, Hoyer learned some valuable lessons playing behind Tom Brady and for Bill Belichick all those years in New England.

He studies and works like the starter every week. He’ll provide the Colts’ coaches with a list of what he likes and what he’s comfortable with in the game plan. He’ll be ready to perform on a moment’s notice, and he expects to play well enough to win if the call comes.

And if he does need help sorting things out against the Dolphins (1-7), Brissett will be right there to help.

“I think the first ball I ever threw to Zach Pascal was a 17-yarder on the sideline Sunday,” Hoyer said. “But having Jacoby there is great because even though I’ve played longer than him, I’m learning about this offense from him.”